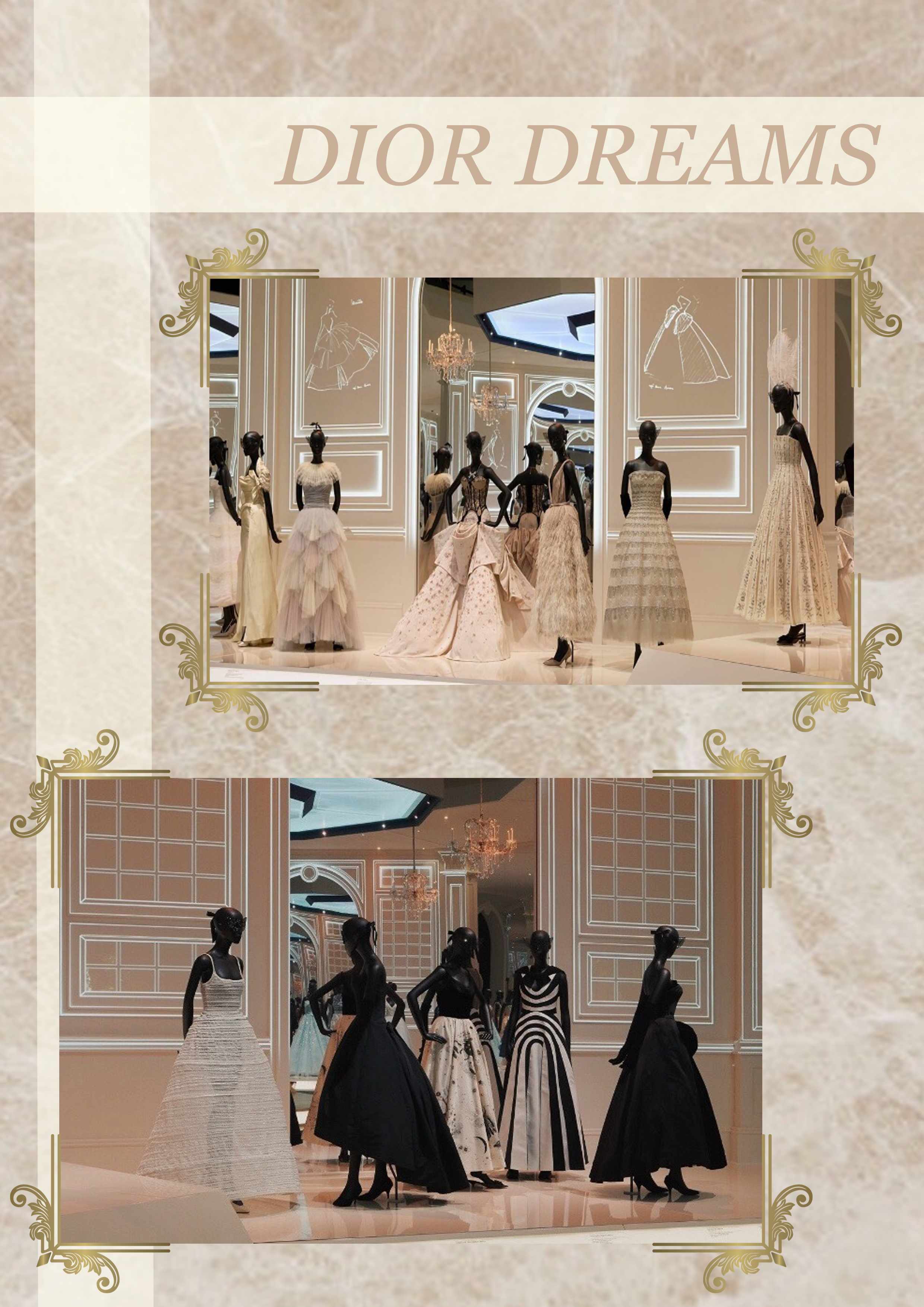 Dior ‘Designer of dreams’ exhibition held at the Victoria and Albert museum is an exhibit being showcased during the time period of 2nd feb until July 14th 2019. Inside displays a world of Dior with a never ending silk and satin. With an almost dreamy like atmosphere, alongside captivating haute couture garments. The exhibition being held is dedicated towards celebrating Dior’s creation from when first established in 1947 to current. Showing the founders original designs as well as paying tribute to the creative designers who carried out their on interpretation of the brand while simultaneously sticking to the ‘codes of Dior’

Being the exhibition being  displayed in England, segments were shown of Christian Dior’s connection to England “I like its customs, its sense of tradition, its politeness, its architecture” a statement Christian Dior wrote of England. Designs Dior debuted on runway shows in England including one that took place at the Blenhiem palace, were presented inside the exhibit. 1951 the designer created princess Margarets 21’st birthday dress an off the shoulder couture gown couture gown, the princess even said was to be her “favourite dress of all” which is shown inside the exhibition, as well as beside it a photograph of princess Margaret modeling the dress displayed on the wall. 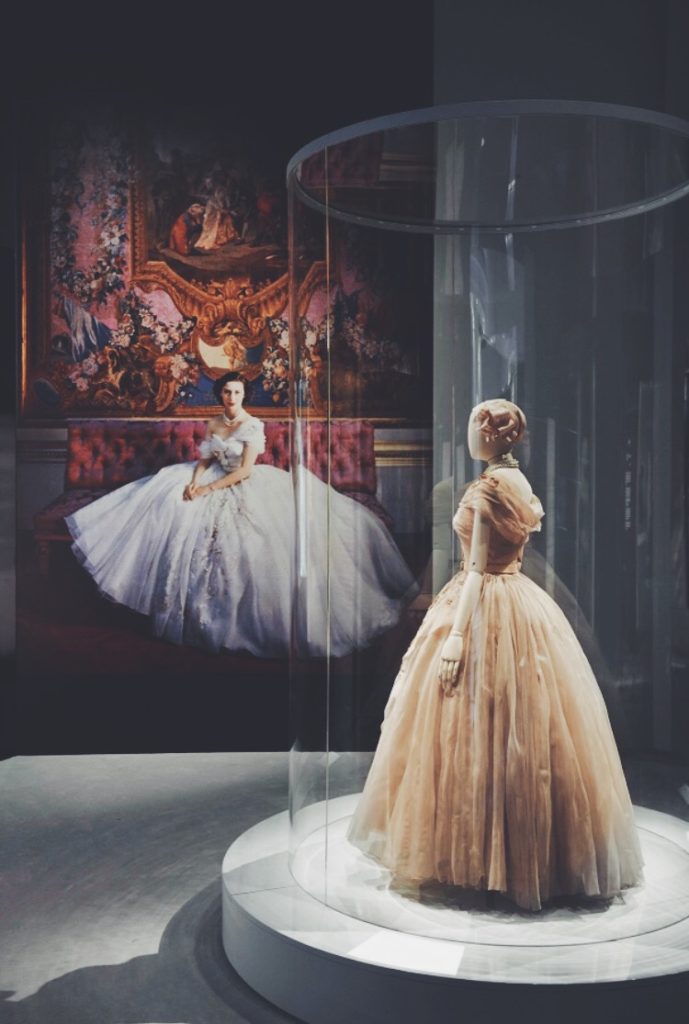 Then there is the all white ‘The Ateliers’ room  which is a room filled with original toiles dedicated to the Dior ateliers which are displayed inside glass, which surrounded the walls around the room. Shows how clothes are put together at the same time sets a reminder of the talent and craft behind of that which is haute couture. “Everything created by human hands expresses something – above all the personality of the creator. The same thing is true with a dress. But since so many people are working on it, the real job is to get all the hands that cut, sew, try on and embroider to express all I have felt,” said Christian Dior in 1954.

The ‘Garden room’s inside the exhibit a room with cascading flowers and glitter made a stunning interior. The purpose of the room shows how flowers and gardens are a source of inspiration towards the many garments of the house.“After women, flowers are the most divine creations,” said Dior. 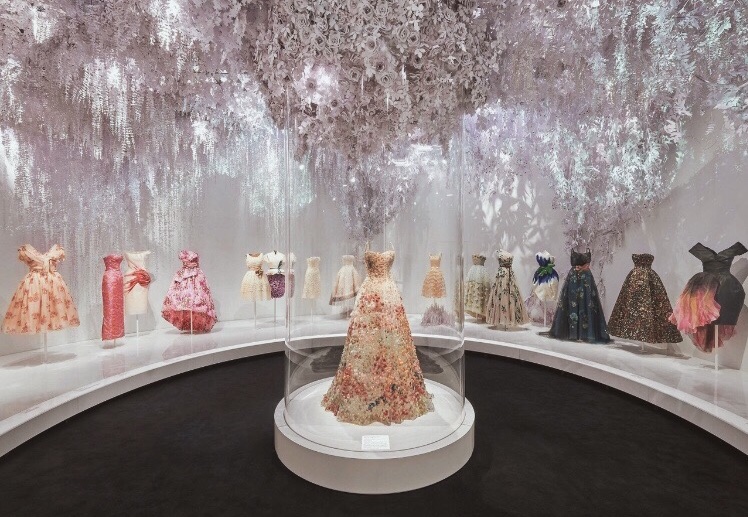 The most vibrant and colourful of rooms was the room called ‘Diorama’ that withholds many items from accessories including costume jewellery, hats, shoes and bags, to miniature dresses, illustrations, and archive lipstick to fragrances, alongside magazine covers from 1947 to the present day. With one of the most iconic Dior parfum’s seen on display which is the designers debut parfum “Miss Dior” the limited edition bottle made from baccarat blue crystal was a sight to behold. And with the launch of the first parfum the designer himself had explained that he wanted to create beautiful scents as well as clothes. Which I couldn’t agree more with that combination.

Another room within the exhibition is the ball room which absolutely captured me, presenting 70 years of formal evening gowns, and Christian Dior’s vision of evening wear as he described as “The evening is a time when you can escape the realities of everyday life.” Featuring some of the most iconic and memorable gowns Dior has created. 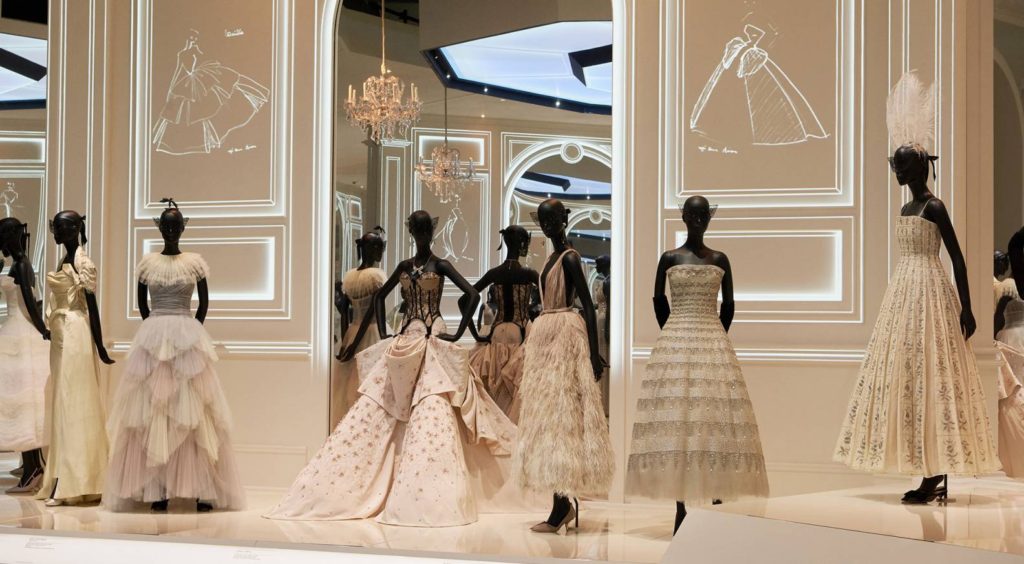 Monsieur Dior’s impact on fashion was clearly shown throughout the exhibition with the garments he created and the fabrics that were chosen all were the epitome of old-school glamour of sophisticated lines and silhouettes cut from luxurious materials. Along with the work of creations by the other designers throughout Dior makes an exhibition that is a sight to see.

Incorporating leather into the wardrobe